“Anything that gets people talking about social situations, social awareness and class consciousness is a very good thing. ” 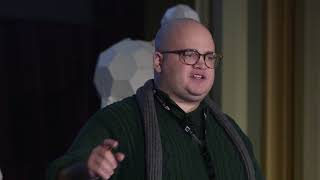 If you are hungry then we feed you

UB School of Social Work student Matthew Schwartz is turning the tables on traditional food pantries, providing food directly to the hungry out of the trunk of his car.

Schwartz, 31, works as a case manager for Jewish Family Service of Buffalo and Erie County, and he noticed that many of his clients were struggling to access food pantries. He is a part-time student in his second year with an anticipated summer 2018 graduation.

“I was working with some child survivors of the Holocaust and also my general community, and I saw one of the food pantry things,” Schwartz says, referring to a list of requirements for those wishing to access a food pantry. “I looked at it and I thought ‘this is so ridiculous the amount of information they’re requesting.’”

Food pantries can require a variety of information from those in need, among them identification in the form of a driver’s license or ID card, documentation of financial need and a local address. Transportation issues and limited food pantry hours also present obstacles to the hungry.

“The system is not built to be conducive to the reality of people who require food bank assistance,” Schwartz says.

He teamed up with the Jewish community, the United Church of Christ and other case managers locally to found Food Gnomes, a mobile food pantry that launched November 2015.

Schwartz graduated from UB in 2008 with a bachelor’s in applied linguistics. He relocated to Israel, serving in the Israel Defense Forces for 37 months. Upon his return to his hometown on Long Island, he completed his MBA at the University of Phoenix.

A “Buffalonian at heart,” Schwartz moved back to Western New York and later enrolled in UB’s MSW program. Social work appeals to him, he says, because it unites his expertise under one goal.

“It takes all of the skills I have and uses them as a tool kit,” Schwartz says. “It’s a way where I get to feel like I’ve made a difference.”

He does make a difference — daily — serving clients and the hungry on the streets through Food Gnomes.

Food Gnomes does not accept financial donations. Rather, the mobile food pantry is fueled by food drives and public donations of non-perishable goods.

Schwartz doesn’t keep statistics on how many people are fed, eliminating a time-consuming bookkeeping process.

“We’d rather spend the time getting food to people,” he says.

Volunteer drivers — or gnomes — are case managers for local social service agencies. Vibrant green magnets identify cars as mobile food pantries, and gnomes dedicate one-third of their trunk space to non-perishable boxed and canned items. They refill once a week — or as needed — at two local distribution centers.

“Volunteers are working with clients already who generally need the food, and they know how to make those referrals if someone stops them on the street,” Schwartz says. “So, it’s not just food. It’s ‘hey, here’s some food, but are things going OK? Is there anything else we can help you with?’”

Schwartz hopes to help more than just the needy in Buffalo; he envisions the organization assisting members of the UB community as well.

He notes that SUNY Buffalo State provides a food pantry for its students. UB maintains a relationship with the University Presbyterian Church’s Food Pantry across from the South Campus where students in need can obtain food.

He feels Food Gnomes can start a conversation about hunger at UB. “Anything that gets people talking about social situations and social awareness and class consciousness is a very good thing,” Schwartz says. “UB students are the best and brightest in the world, period. I think UB has a lot to offer the community.”

Schwartz offers a lot to the community as well through his work as a case manager and with Food Gnomes.

“We really believe in having an impact by answering the needs as the community states them, not what we think they are,” Schwartz says.

“We only have one question: Are you hungry? If the answer is yes, then we feed you.”

SSW at a Glance

Engaging practitioners and researchers in lifelong learning and promoting research to practice and practice to research.
>Listen now

Engaging practitioners and researchers in lifelong learning and promoting research to practice and practice to research.
>Listen now