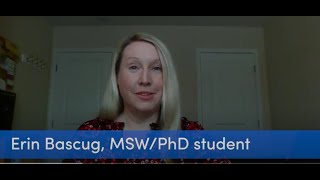 Watch to hear Erin's experience in the program!

Most of our MSW/PhD graduates obtain academic positions in Schools of Social Work, including institutions such as:

“Social work gave me tools to start looking at this in a professional way; I’m learning the lessons as a social work researcher. ”

A career in social work was something Nurit Fischer didn’t initially anticipate, despite her early and unceasing cognizance of the helping vocations. Fluent in Hebrew, Spanish and English, Fischer came to the States from Israel, where she earned a BSc in Pharmacy from The Hebrew University and an MAEd in Science and Technology Education from Ben-Gurion University. When she got to Buffalo, she began work as a volunteer and freelance licensed interpreter in courts, hospitals, schools and social settings.

“I had a client in social services in downtown Buffalo; I’d interpreted for them several times,” recalled Fischer. “One day, while I was interpreting, I lifted my head and saw this nice social work diploma. I thought, ‘Why should I just be the interpreter? I can be the social worker.’”

That thought translated into immediate action. Fischer stopped at Buffalo State College on her way home and inquired about a bachelor’s in social work. Recognizing her extensive experience and background in human services and related fields, she was advised to apply to the UBSSW’s MSW program. Now a PhD student in the UBSSW, Fischer’s cosmopolitan mentality and ambition benefit many of her classmates.

“I’m developing a program to provide support for international students. We’re in the process of expanding what was originally a resource book for MSWs; now it will help PhD students as well,” she said. “I'm also working with a support group, where I meet with students who, in addition to dealing with academics and language, may have issues with change of culture, country and environment.”

Interested in the effects of multigenerational international trauma, Fischer’s research is focused on second- and third-generation survivors, with a particular concern for issues related to Holocaust offspring.

“Although they developed coping mechanisms, the second generation is getting older,” she said. “After growing up with the conspiracy of silence and other issues dominant in historical traumas, things like secondary trauma and depression emerge. Social work gave me tools to start looking at this in a professional way; I’m learning the lessons as a social work researcher. The fact that the first generation is almost not with us anymore gave me the urge to keep documenting how people cope; this is imperative because the world is creating more historical trauma, so future generations will also have to deal these issues. We need to provide them a means to do that.”

Learn more about our PhD program